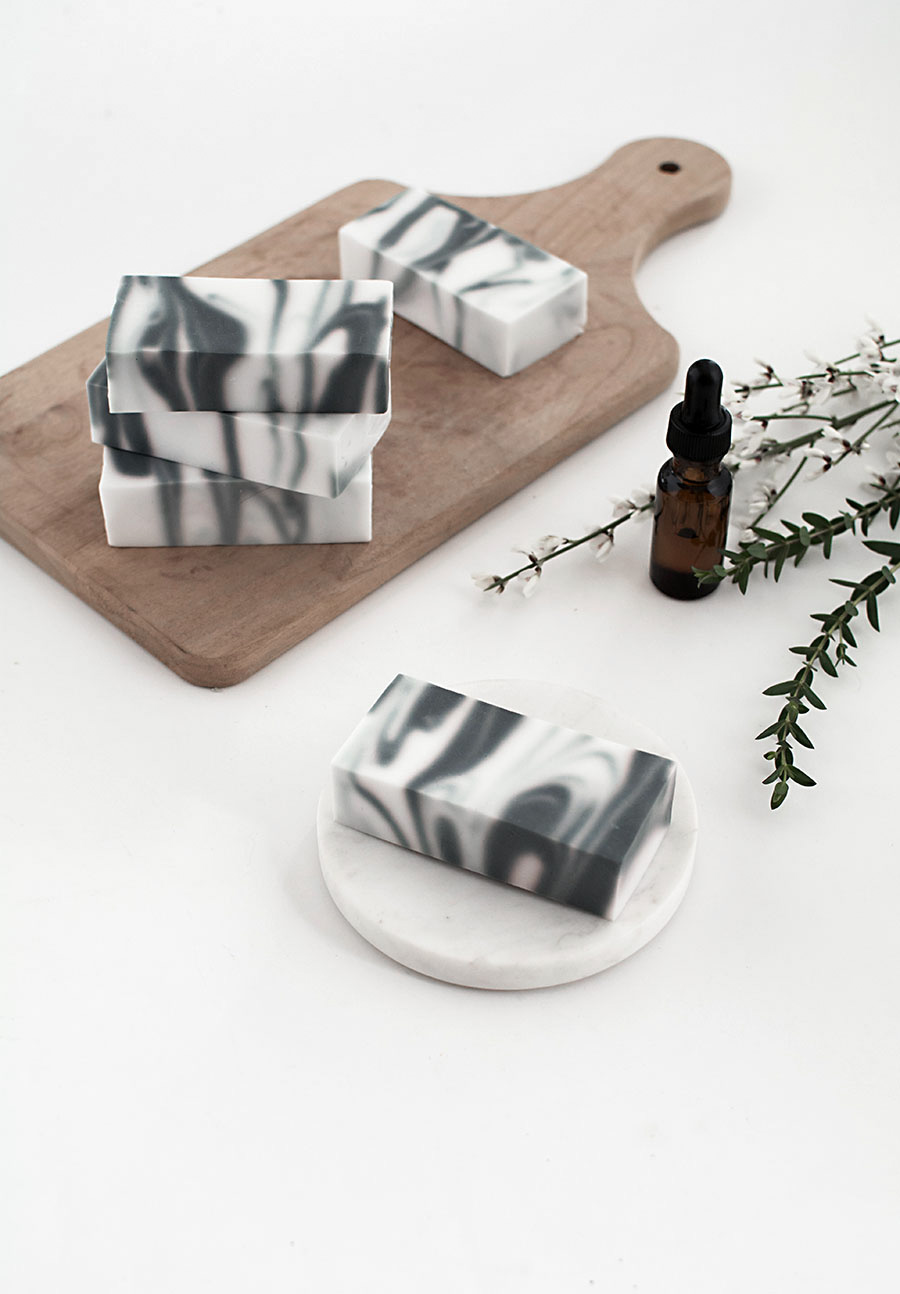 Yes, it’s much easier to buy bars of soap, but will it be marbled, smell like eucalyptus mint, and carry the pride and joy of knowing that you made it??  Replace that scent with something you like in case you don’t like eucalyptus mint.  Let me show you how. 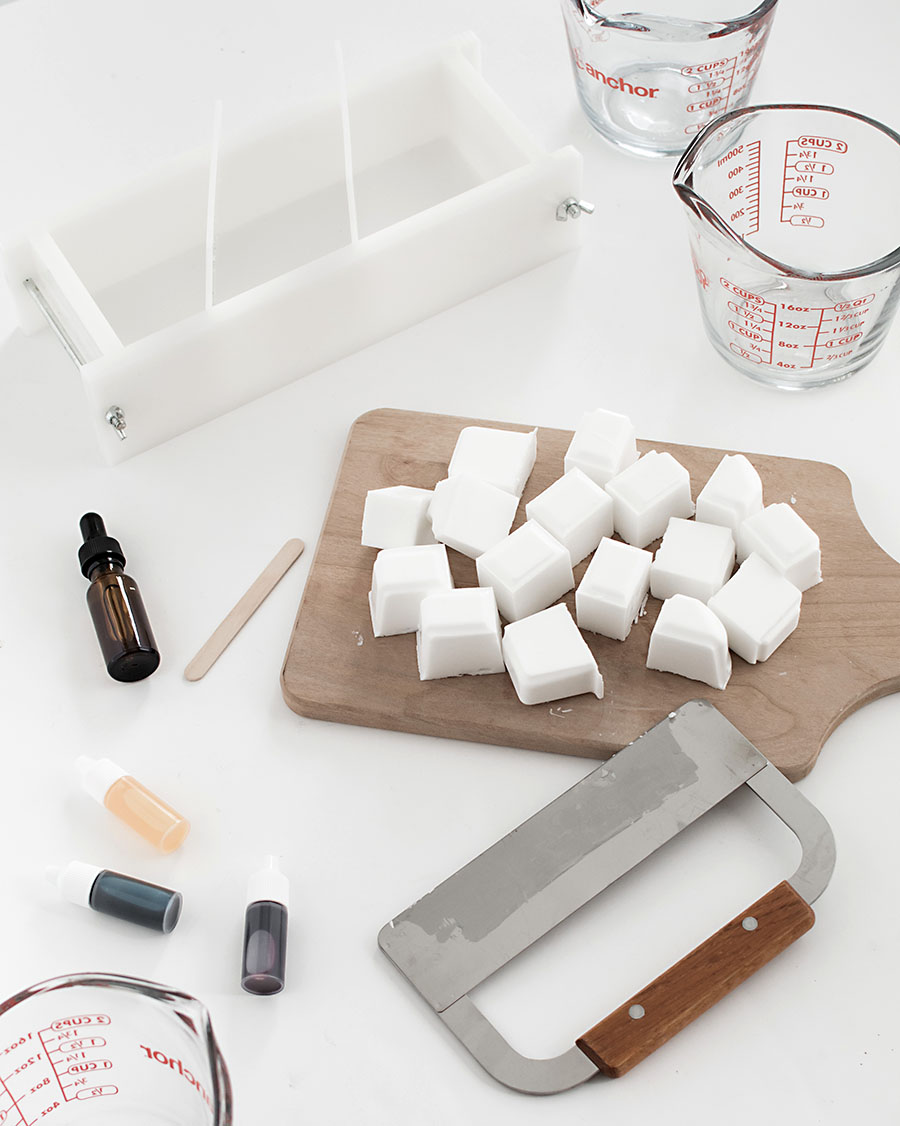 It’s a lot of stuff, and I actually had it all collecting dust for the past few months as I planned to do this as a DIY gift idea during holiday season, but you already know how easily something like this can become another item on the list of stuff we wish we had time to do.  So we’re doing it now! 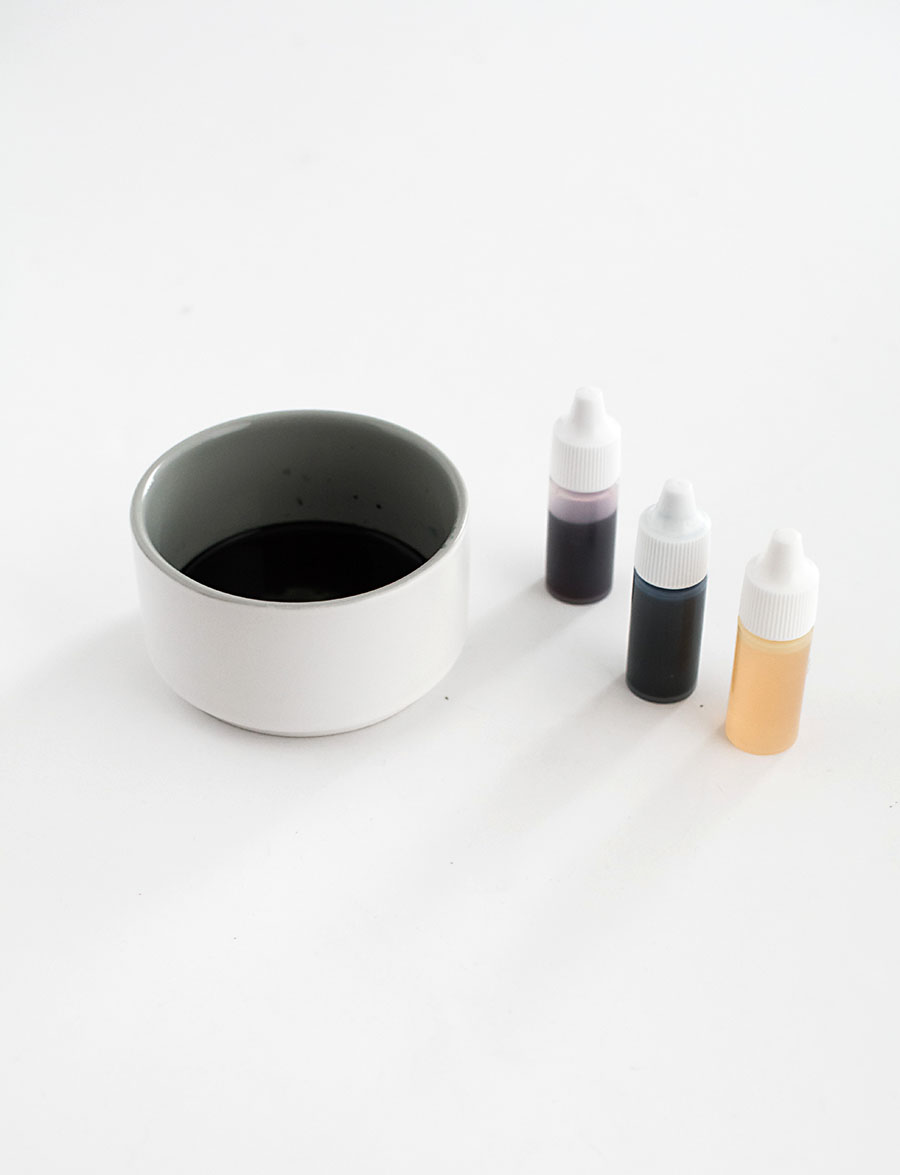 You can use whatever color(s) you wish, but I mixed red, yellow, and blue dyes in equal parts to get this blue-ish dark charcoal color.  The more dye you use, the darker the color will show in the soap.  I ended up using about half of each bottle of dye.  Note: wear gloves or else if you end up touching the dye, it will stain your skin.  I have to learn this every time I use dye.  Somehow I can never remember putting on gloves first. 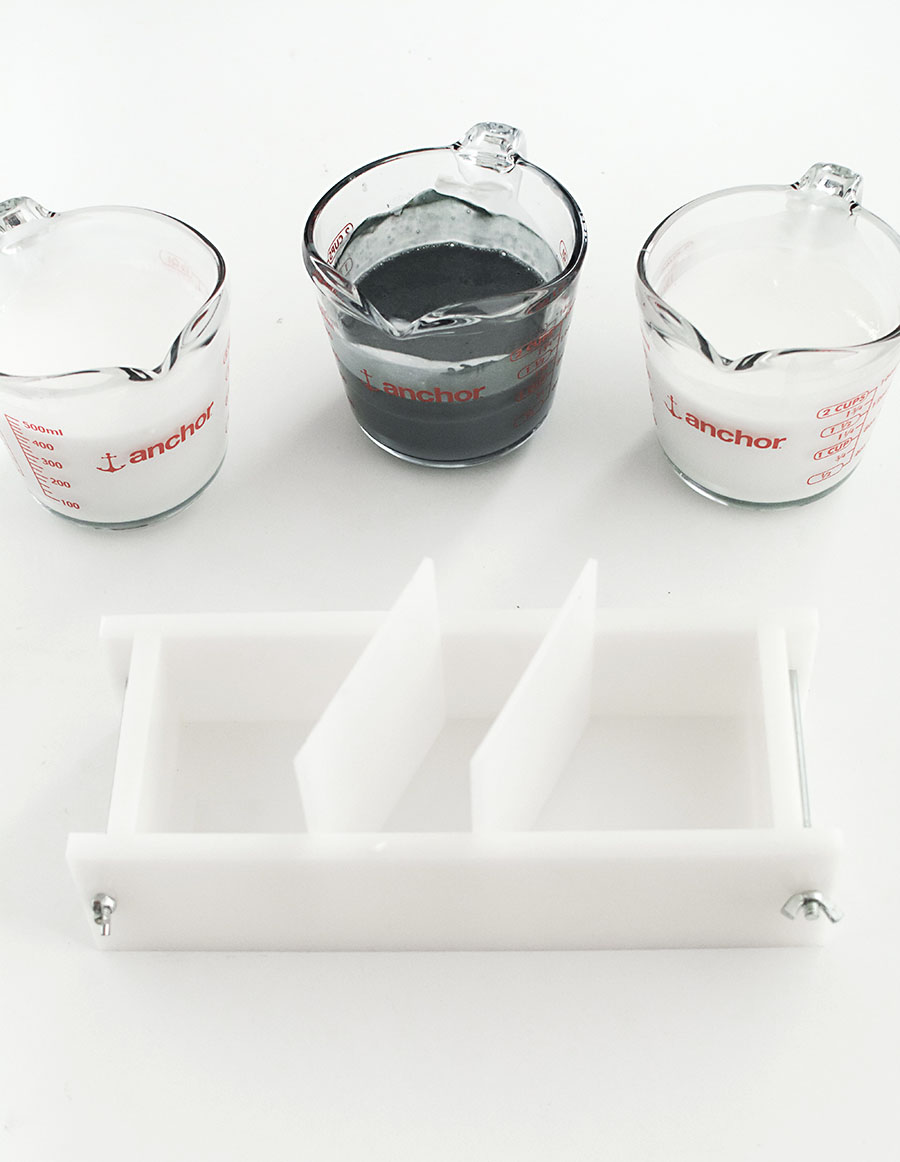 Cut up the soap into blocks and place them in the glass measuring cups.  I used a total of about 3 lbs of soap.  Microwave them in 20 second intervals until completely melted, stirring in between as needed (I used a wood dowel).  Heating in intervals is recommended because if you try to melt it all in one long shot you run the risk of the soap over-boiling and spilling everywhere in the microwave and then you’ll have to spend a very long time cleaning it all up.  This has happened to me before, I’m not making it up.

Mix the dye into one of the cups, then mix the fragrance into all the cups.  I did roughly 20 drops in each cup and really don’t know if there’s a science to figuring out how many drops is sufficient but this amount worked fine for me.  Work pretty quickly through these steps as you don’t want the soap to cool down too much before the next part.  Reheat if necessary. 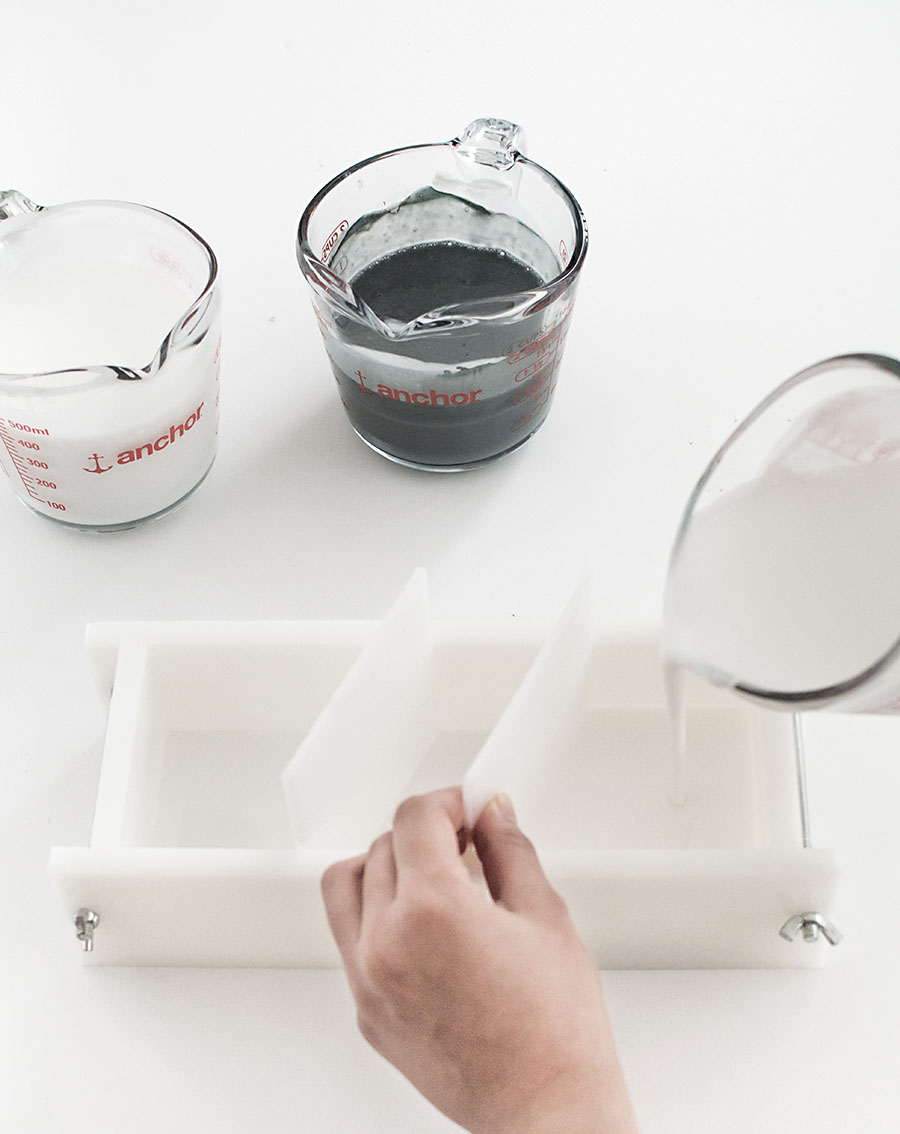 Placing the dividers in the mold, start pouring in the soap one color at a time.  Since there isn’t anything holding the divider in place, hold it by hand as you pour, though it’s not a problem at all if it moves or the soap leaks past it.  Work quickly to get the rest of the soap poured in. 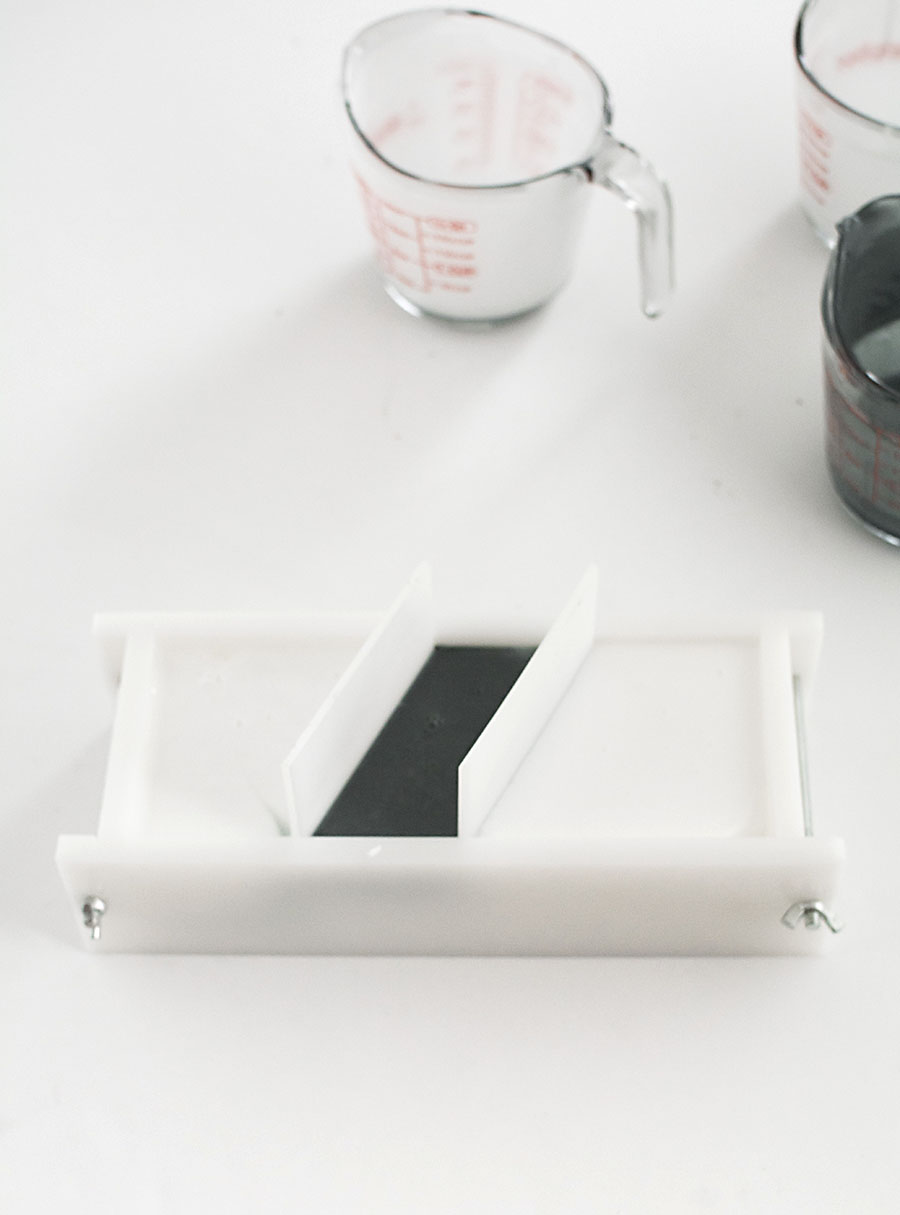 I poured in less of the charcoal color since I wanted the soaps to be mostly white, though you can adjust this to your preference by placing the dividers wherever you see fit. 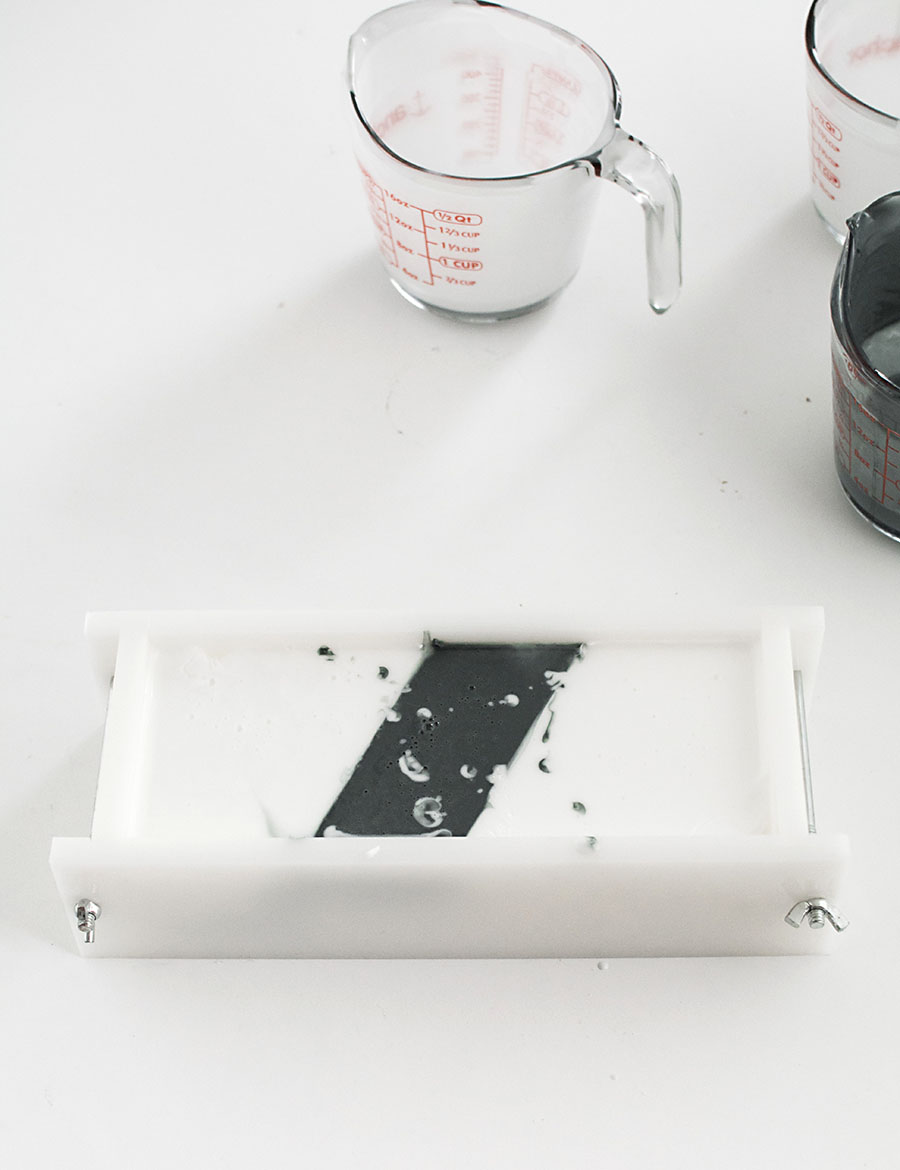 Remove the dividers then quickly start swirling the soap with a stir stick. 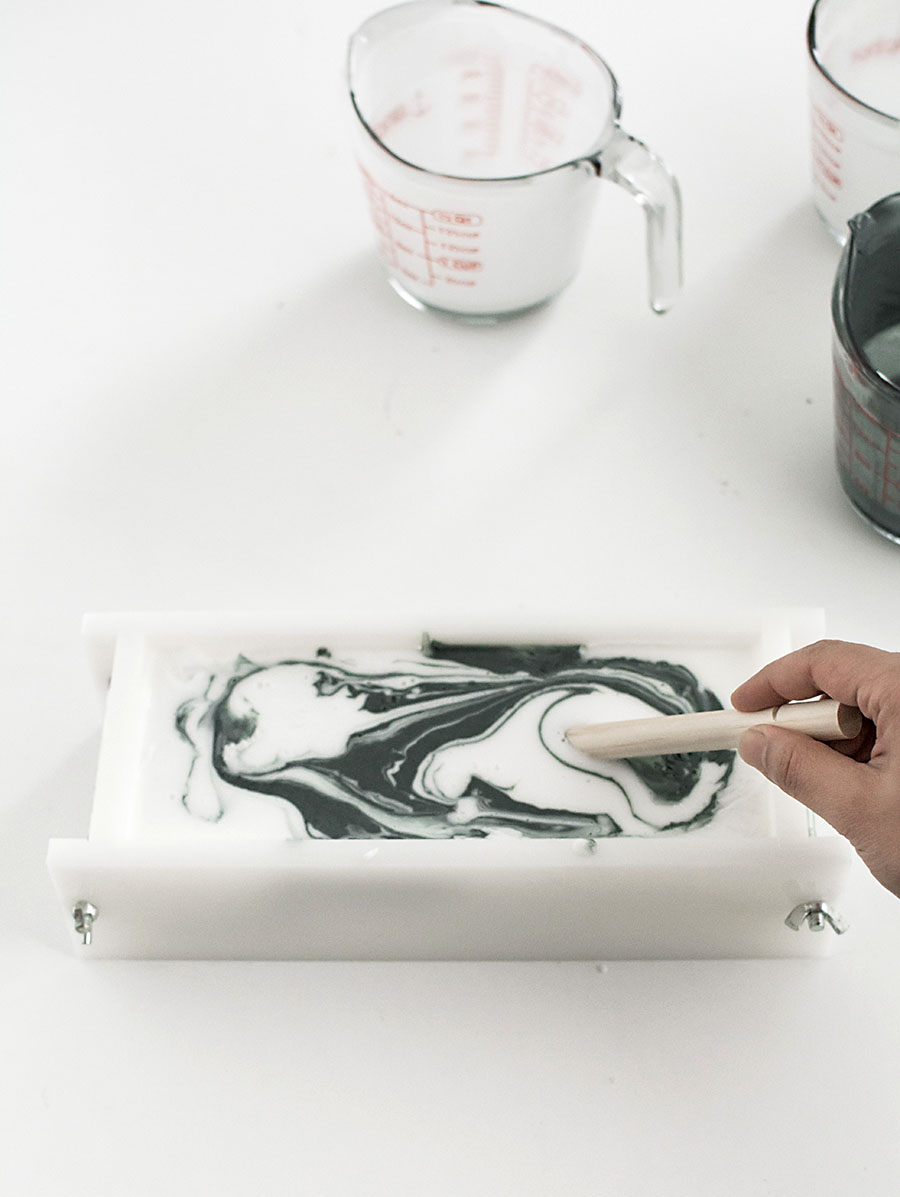 Be careful not to over-swirl or the marbling will get muddy and less defined.   Also make sure to swirl the entire depth of the soap and not just near the top.  The loaf will harden after a couple hours but I recommend letting it sit overnight  or completely cool before disassembling the mold and cutting the loaf.

I cut mine into roughly 1″ thick and 1 3/4″ wide pieces.  Half way through cutting the loaf, I noticed that the marbling pattern from the side wasn’t as cool as it looked from the top, so I started cutting the pieces in a way that made the top of the loaf the face of the soap (1 3/4″ wide) and then would cut each piece in half lengthwise (parallel to the top of the loaf).  Was that confusing and unnecessary to explain? 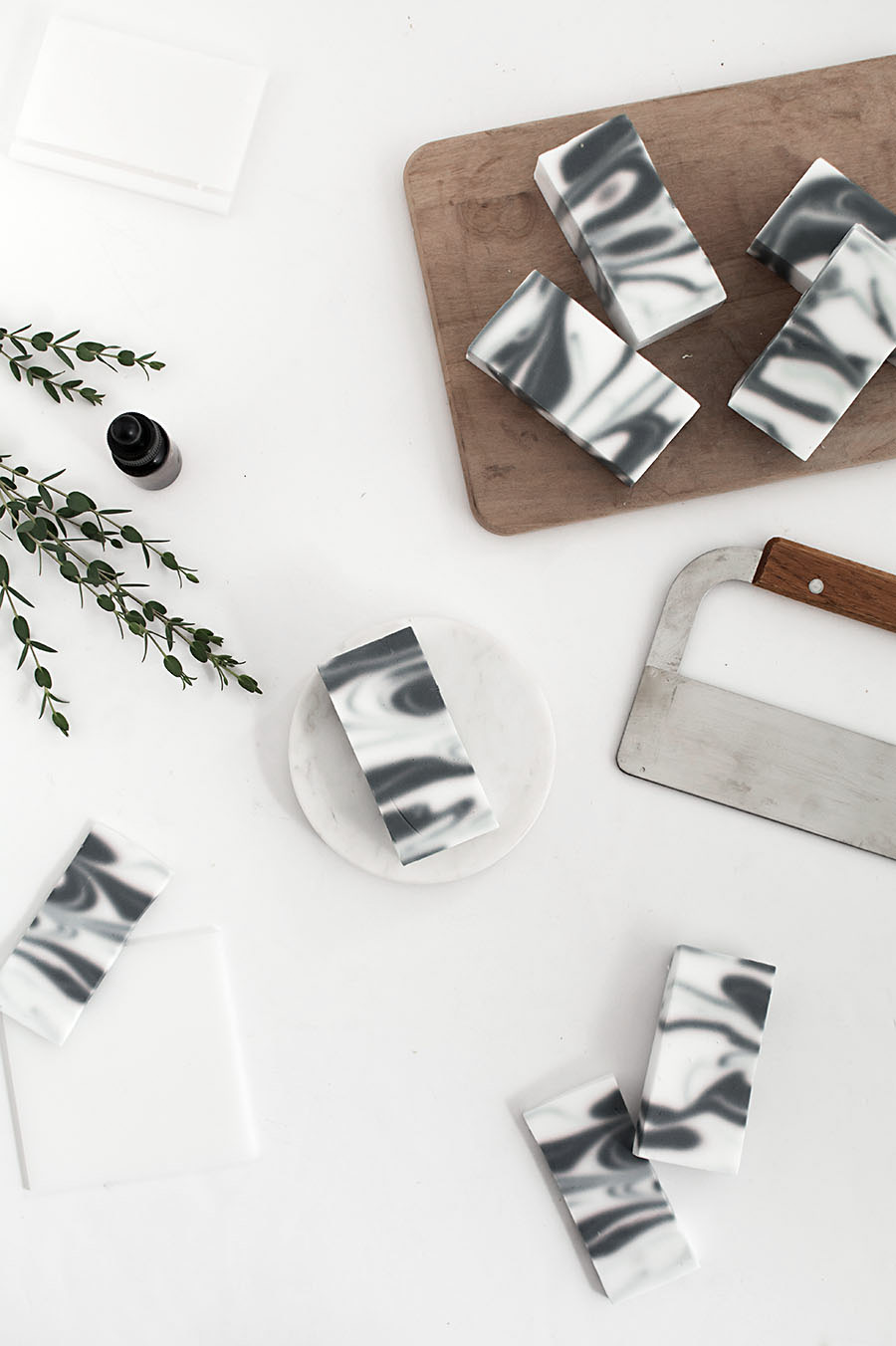 I wasn’t at all concerned about being super even or straight about the cutting, so I didn’t use a cutting guide, though you should certainly use one if you want precision. 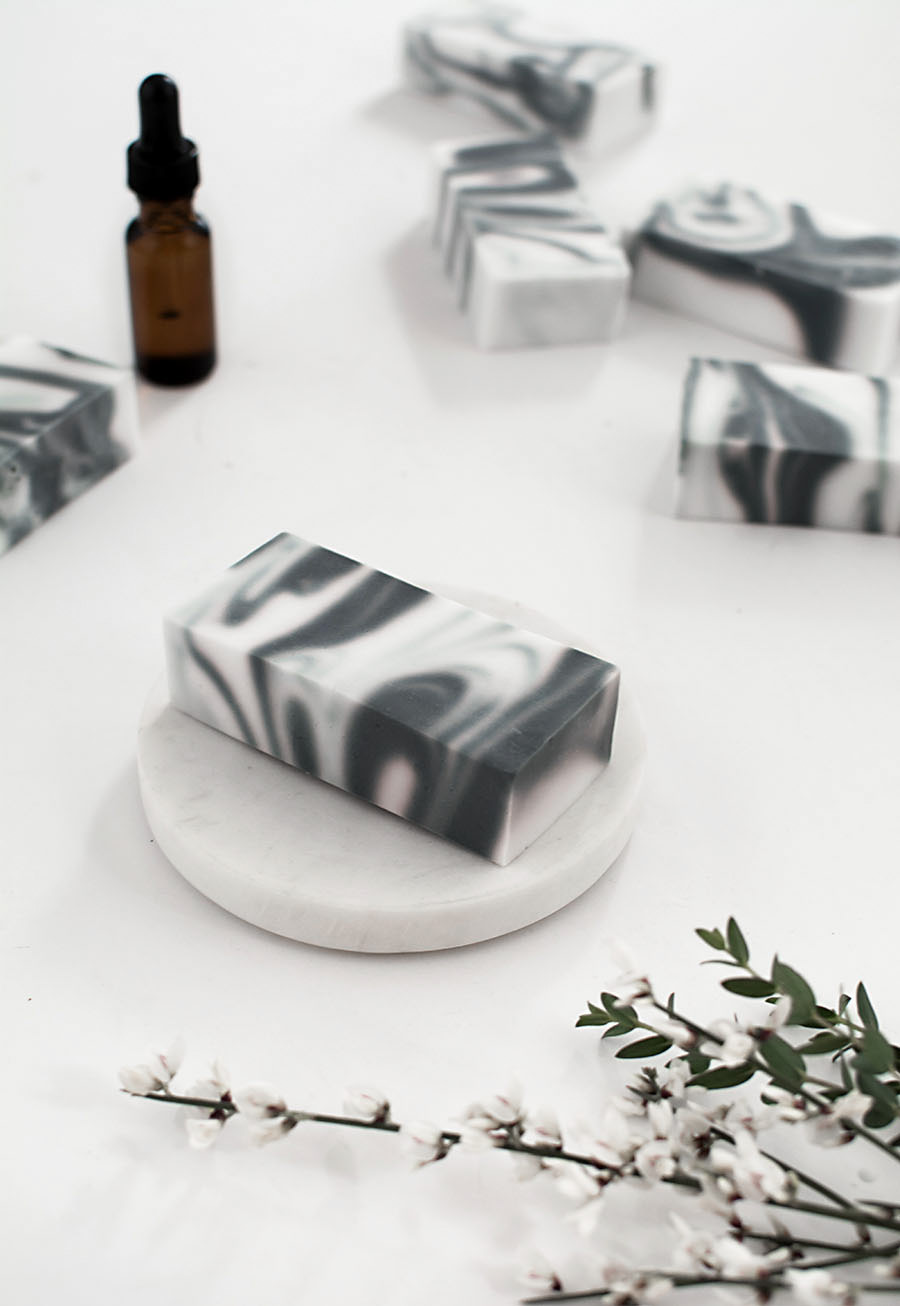 I was going for bold marbling patterns with this one, but next time I’d like to try a lighter shade of gray and try to mimic the more subtle patterns of carrera marble, why not.  It would also be cool to repeat these colors again but make the majority color the dark charcoal and ribbon the white soap through it ooo. 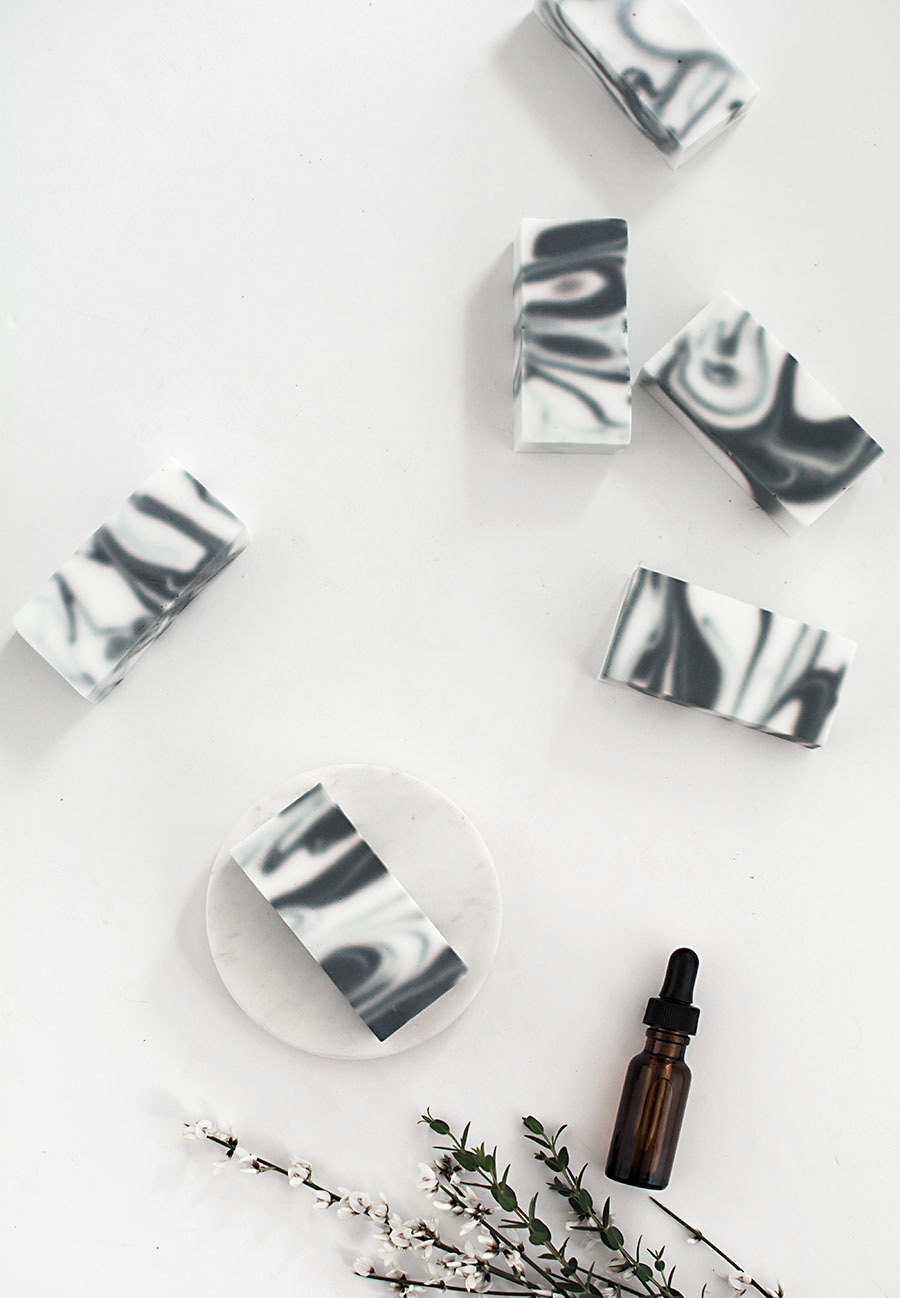 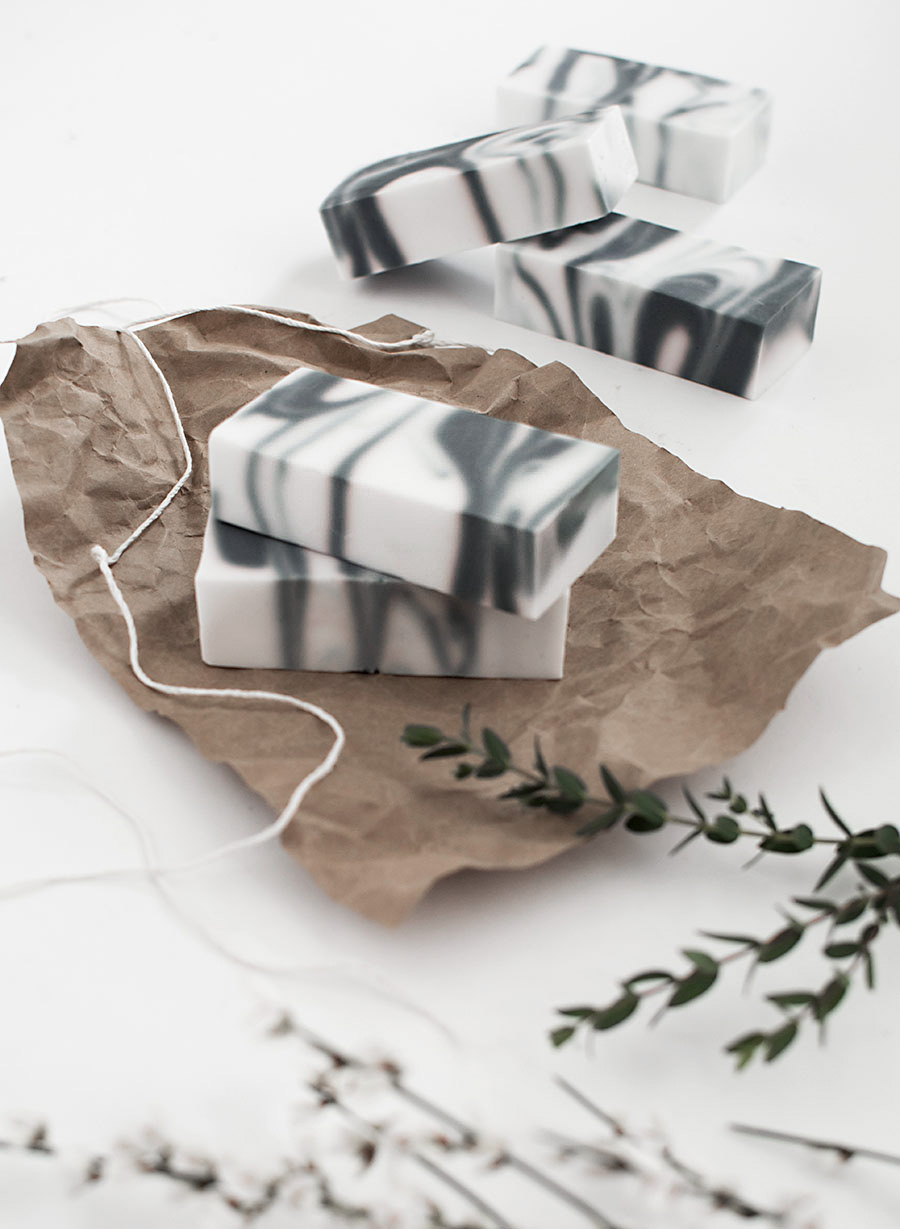 As I kind of mentioned before, this is a cool gift idea/favor + you can easily make a bunch at a time.  Wrap it cute, say “I made this for you,” and it will be loved.  And of course, keep some at home and enjoy it for yourself.  Does anyone still use bars of soap?  We like to keep one in the shower but it’s been a while!