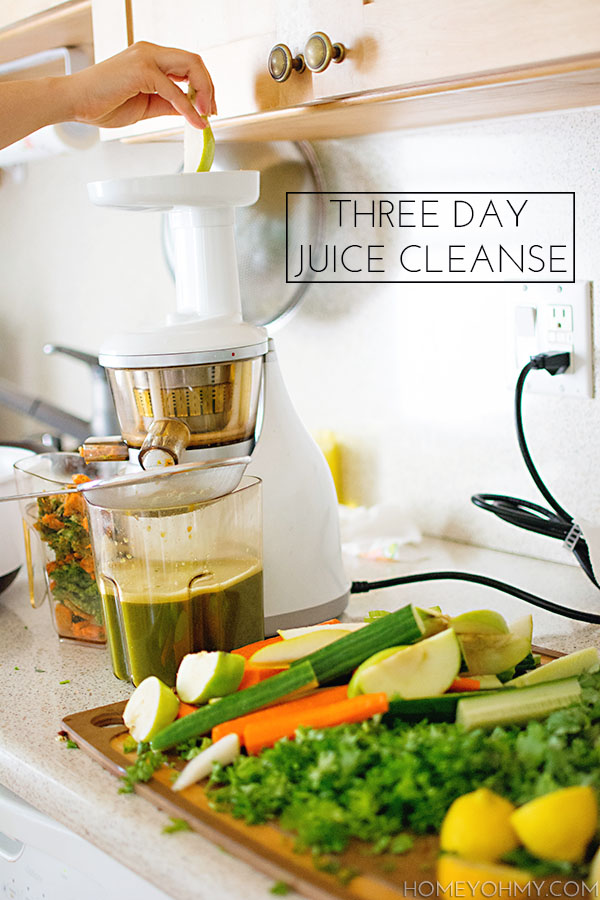 While everyone’s talking about barbecues and patriotic treats for this 4th of July, I’m going to be sharing the details of the three day juice cleanse I just went through… Still interested???  Stick with me, guys.  Juices are delicious, too!

I shared the news on Instagram and after getting a positive response and expressed interest in how it went, I thought yea I’ll have to post on the blog about it.  Thanks for that by the way everyone, and for all your encouragement.  I didn’t think I was going to make it D:

And that brings us to the disclaimer: I am NOT an expert on this topic.  This was my first juice cleanse ever, and it also happened to be one I JIY’ed (juice it yourself).  I’m writing to share the details of my experience rather than to advise you on what’s the best way to do a juice cleanse, because there’s no way I would know that information.  At the very least, this is about sharing some delicious juice recipes you at-home juicers will love.  <3

So let’s start with an important question…

WHY DID WE GO ON A JUICE CLEANSE?

My boyfriend has been struggling with acid reflux.  At the recommendation of his doctor, he went gluten-free for a couple weeks.  A miracle… his acid reflux subsided.  So we continued on, and the next part of the plan was to eat only raw veggies and fruits for three days, which I did with him (’twas difficult), and then… a three day juice cleanse.  The idea was to reset the system, clear everything out, and then after the cleanse, to start re-introducing foods back in to see what the culprits are.  Ultimately, this is the beginning of becoming a lot more diet conscious.

So my reason for the cleanse is him.  I wanted to support him, and especially since we cohabitate, it would have made things unquestionably harder for him had I been cooking my own delicious meals while he juiced by himself.  We did it together, because we are a team <3.

Before you say that was nice of me or anything, I’d like to share that I complained HARD, and often, especially in the beginning.  He would gladly tell you all about it.  “Hangry” is a real thing.

We based our recipes and schedule off of a local, pre-made juice cleanse package that we had considered purchasing, but decided instead to save some money, put in the extra elbow grease, and put our own juicer to use. 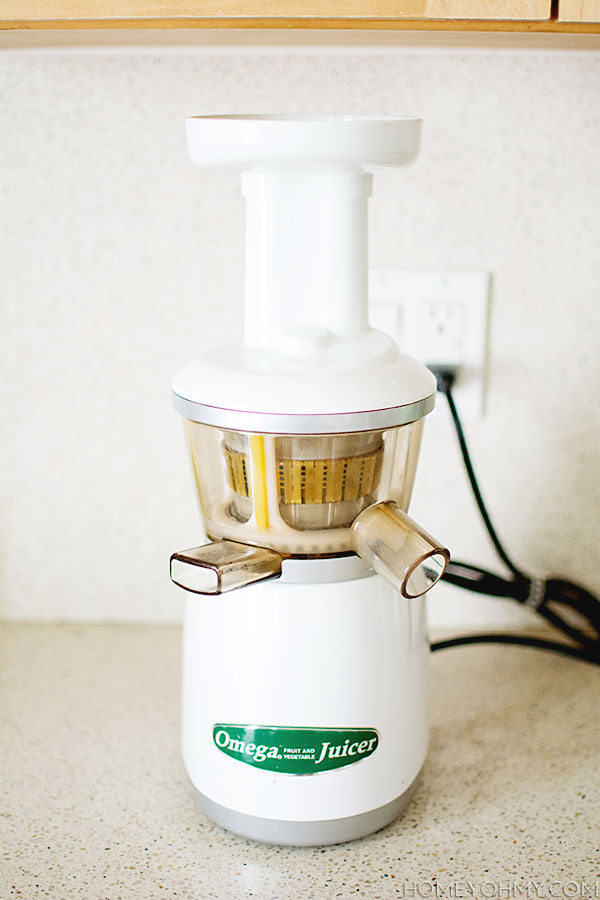 This is our Omega Juicer.  It’s a masticating juicer that crushes the fruits and vegetables instead of shredding them, which gets more of the juice out.  Thing is, some of the pulp comes out with the juice, so we used a strainer to catch and remove it.

We made three different juice recipes, two green and one red.  Each day we made one day’s batch for the both of us, which is all three juices in the following quantities.  Some of it we made up as we went, and we weren’t exact on quantities, but this is roughly what I can remember about how we made each juice.  Everything we used was organic. 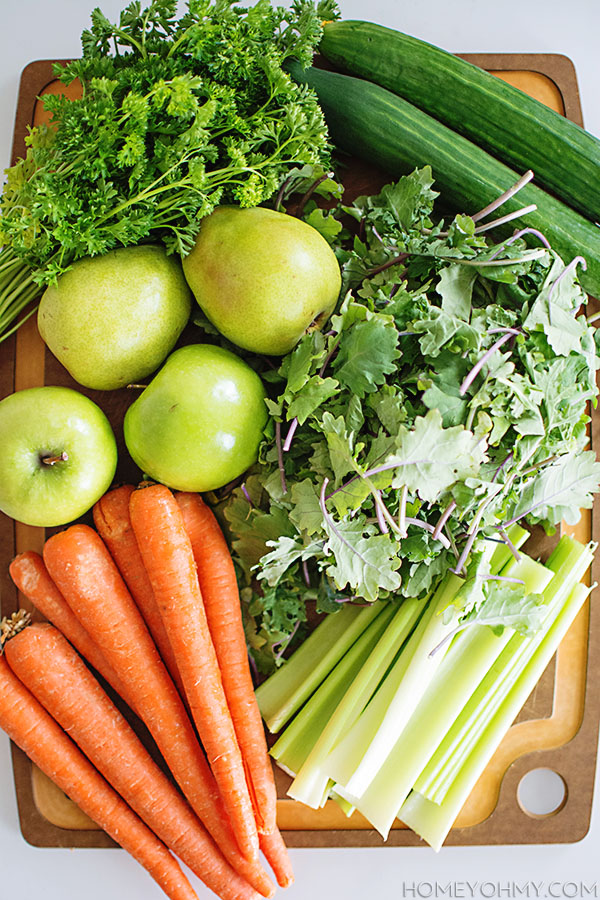 This juice was the mildest of the three.  Had a very clean taste. 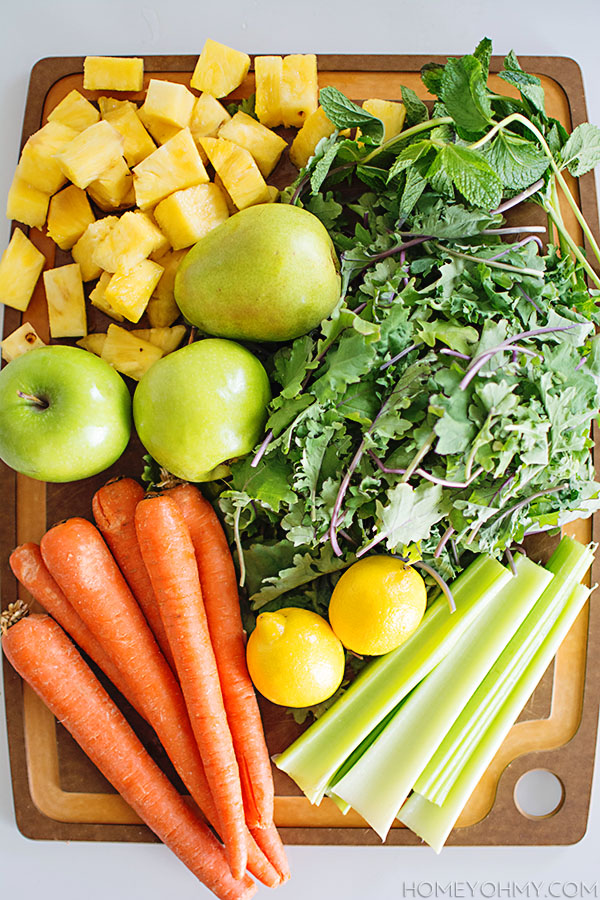 The mint was sooooo gooood, especially with the pineapple.  Made this one extra refreshing, and it was my favorite. 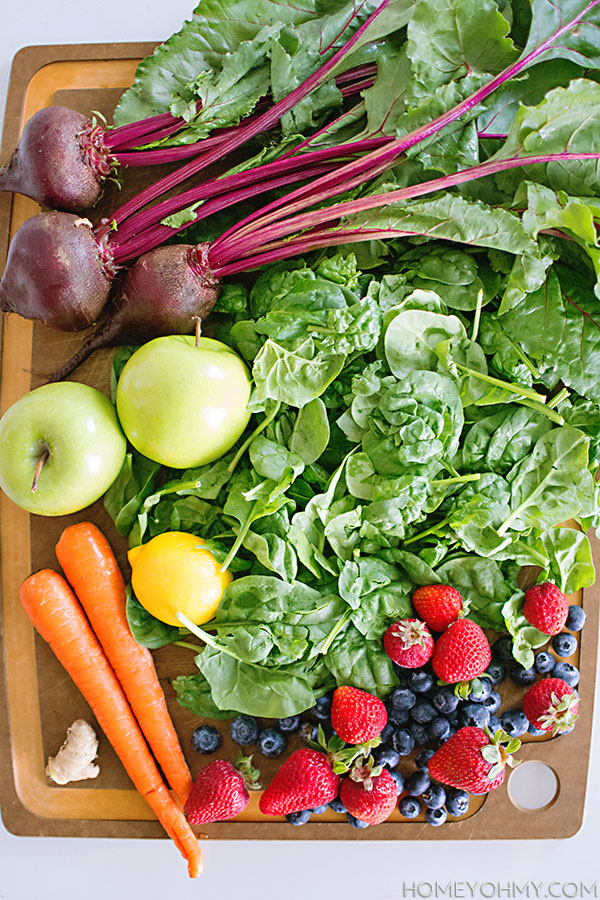 -3 beets, including the stems and leaves
-2 green apples
-4 large handfuls of spinach
-2 carrots
-1 lemon, no rind
-handful of blueberries and strawberries (We only added these because we had them in the fridge and they were soon to go bad, but they added a nice tart flavor to the juice that I really liked.  They did make the juice thicker though, which might not be preferable.)
-little bit of ginger to taste

The first round of red juice, we used about an inch of ginger, which I loved, but my boyfriend hated it.  The kick was too much for him, so we reduced it down to about the size of a fingertip. 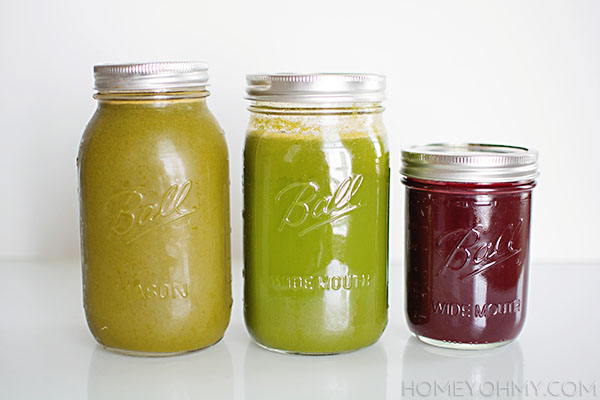 I mixed up the order as I pleased, but the idea is to space out 16oz servings 5 times a day

All in between, we drank water often.  It was also important to get good sleep every night and make sure we were well-rested, and really, we didn’t have tons of energy during this whole thing, so we were happy to go to bed early.

All in all, it wasn’t terrible, but I think three days is my max.  The first day after the cleanse was over, everything tasted a little strange!  We both agreed that it felt like our taste buds were off, and we were starting to crave fruits and veggies again.  Still, I much preferred that than to have continued on with the cleanse.  I’m proud of having gone through it, but I love food too much.  This isn’t the end to my juicing, but now it will just be in addition to regular meals.

Have you ever done a juice cleanse before?  Did you JIY it?  I’d love to hear about your experience and any delicious juice recipes you know of!