Other than going to Coachella once before, I’ve never spent real time in Palm Springs until this past month for a little blogger meet-up to just hangout, eat, and drink.  How chill is that!  A few of the ladies were going to be in town and organized the genius idea of gathering everyone nearby for a short stay at The Saguaro.  There were only a couple ladies I hadn’t met before who were so good to finally meet, and seeing everyone else again is always a good time.  Recognize any of your favorite DIY bloggers here? 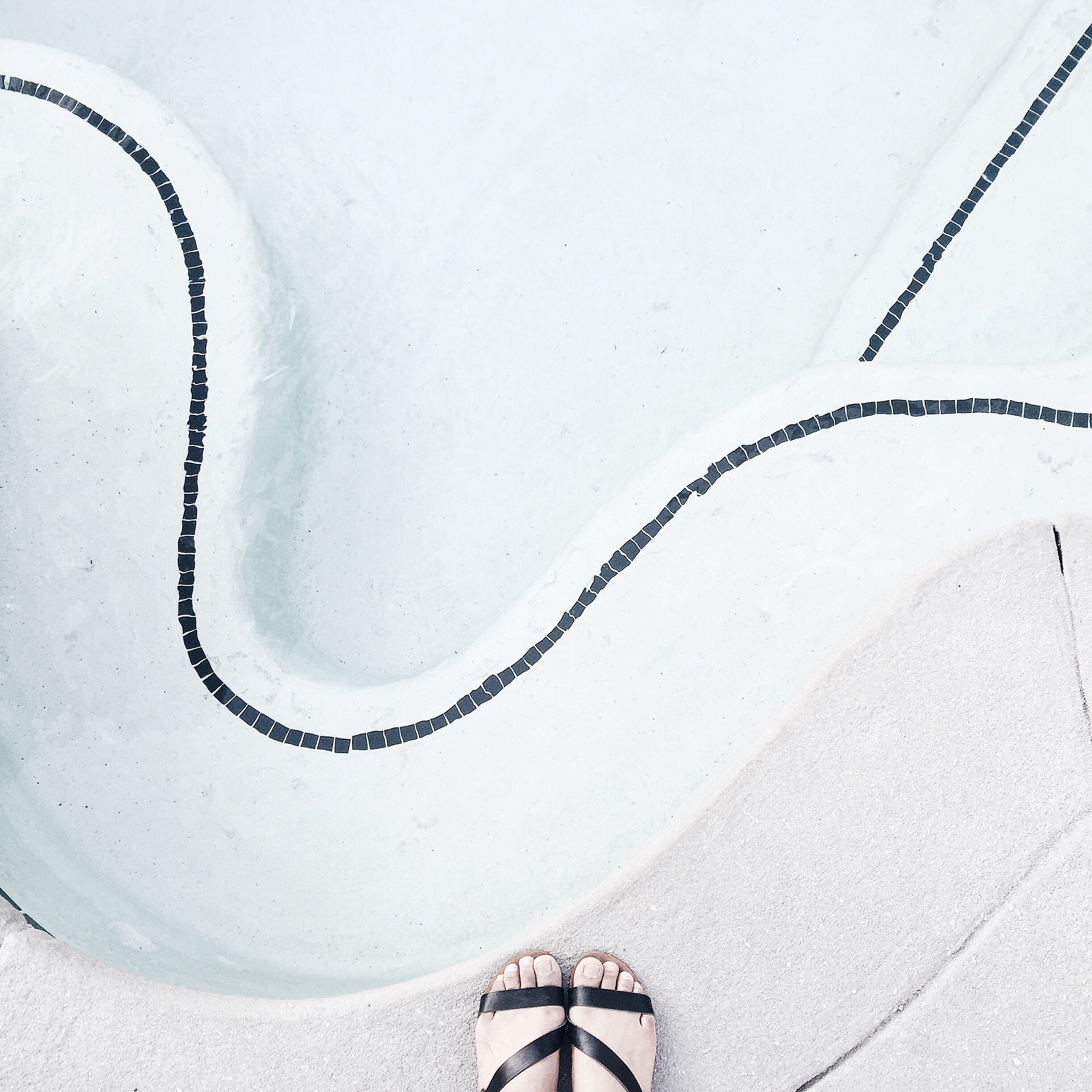 I’m very into the type of vacation where you just stay at the hotel and hang out by the pool.  I figure part of it is my strong homebody tendencies, but also I think being able to relax this way is one of the biggest luxuries I can think of.  I’m all for adventure and exploration too, but quiet times like these are so rare and delicious. 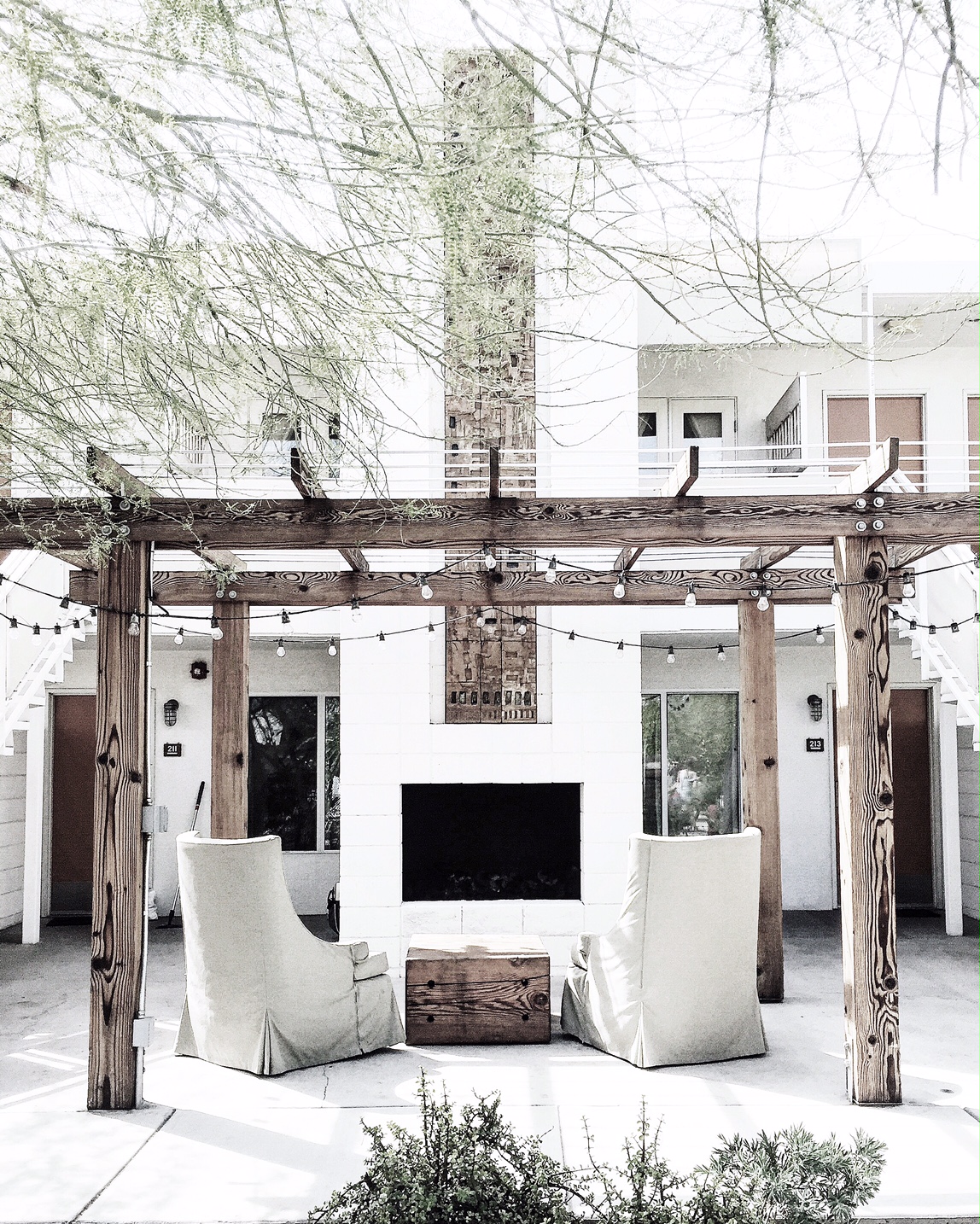 We visited a few of the other hotels in the area, The ACE Hotel being my favorite I mean look at this cute little pergola.  I’m for sure staying here next time I come back. 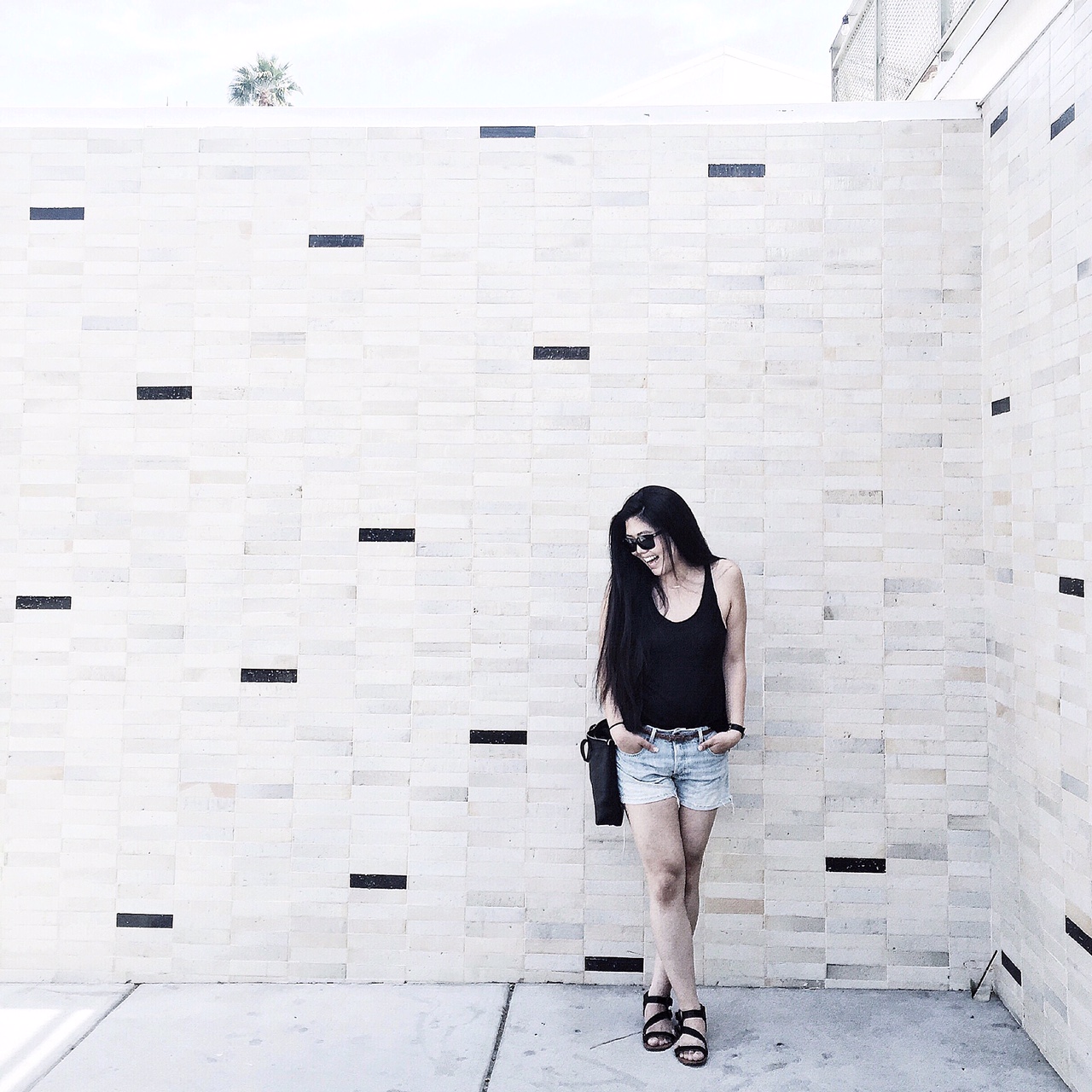 Random: this photo only exists because I was with a group of bloggers strongly encouraging me to take a photo in front of this wall because I pointed out how much I liked it.  This would never happen with any other group of people I know haha, hello.  This wall is at The ACE Hotel, love. 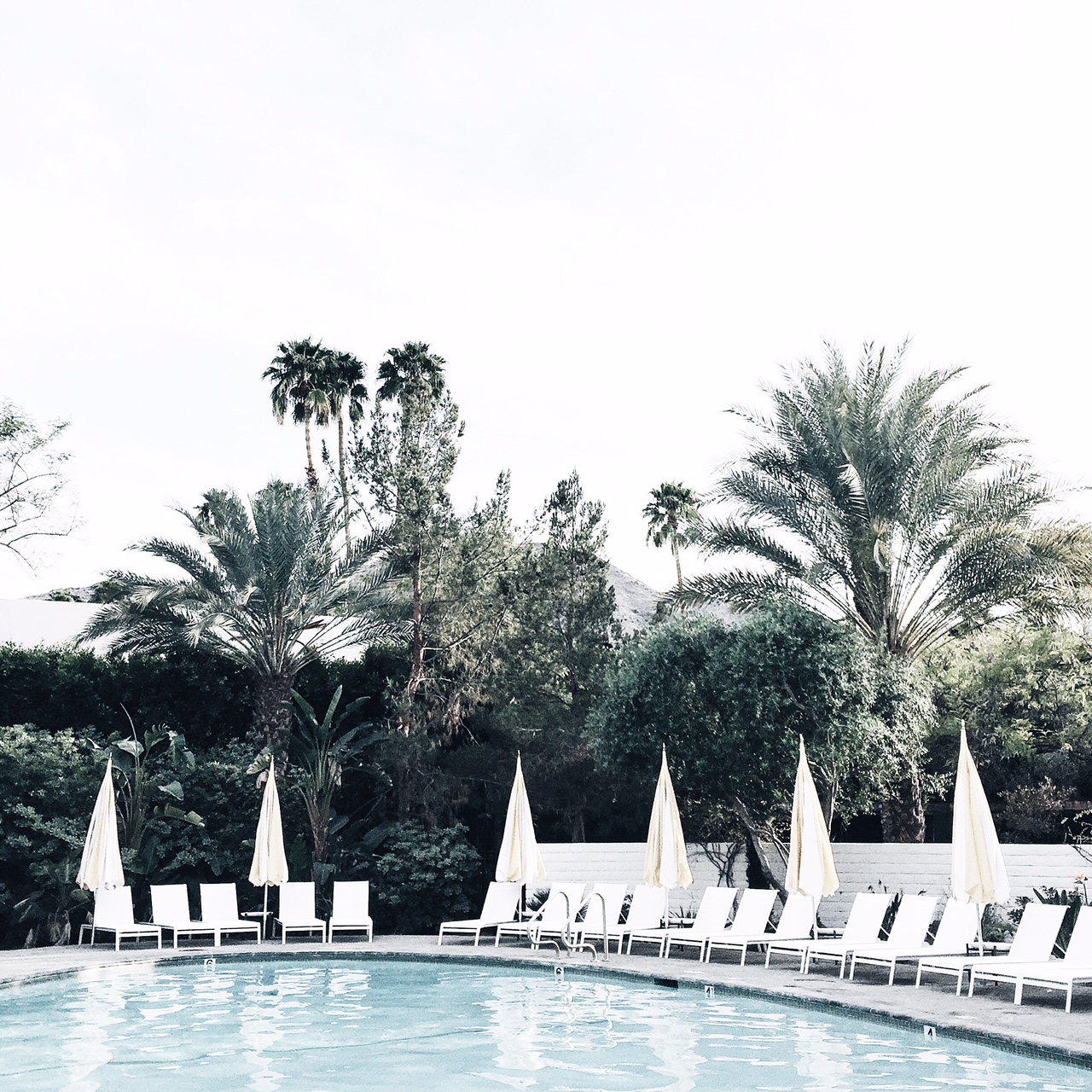 We also visited The Parker which was gorgeous and where I’d want to stay the time after next time I come here.  I learned that Jonathan Adler designed the place, which made a lot of sense right when I saw the lobby but boo I didn’t take a photo of that, oh well. 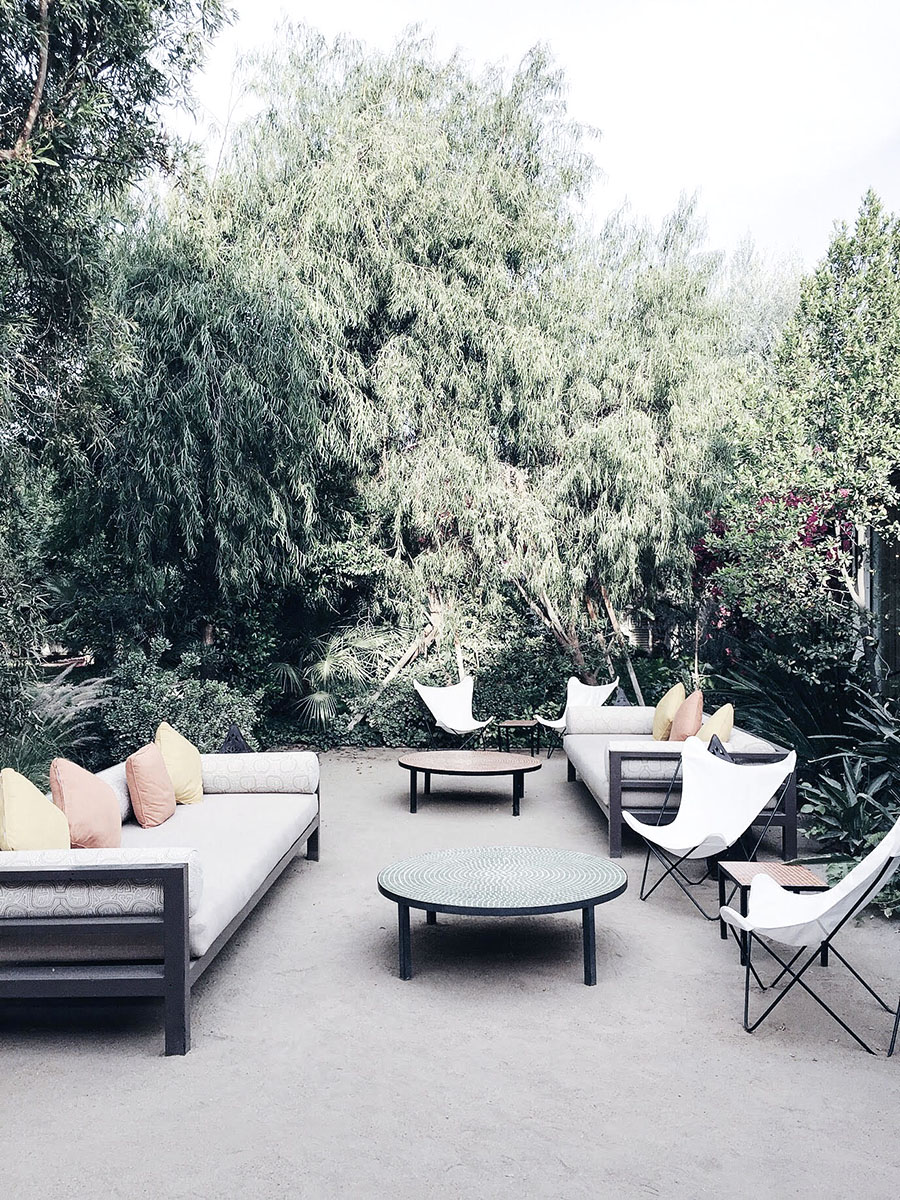 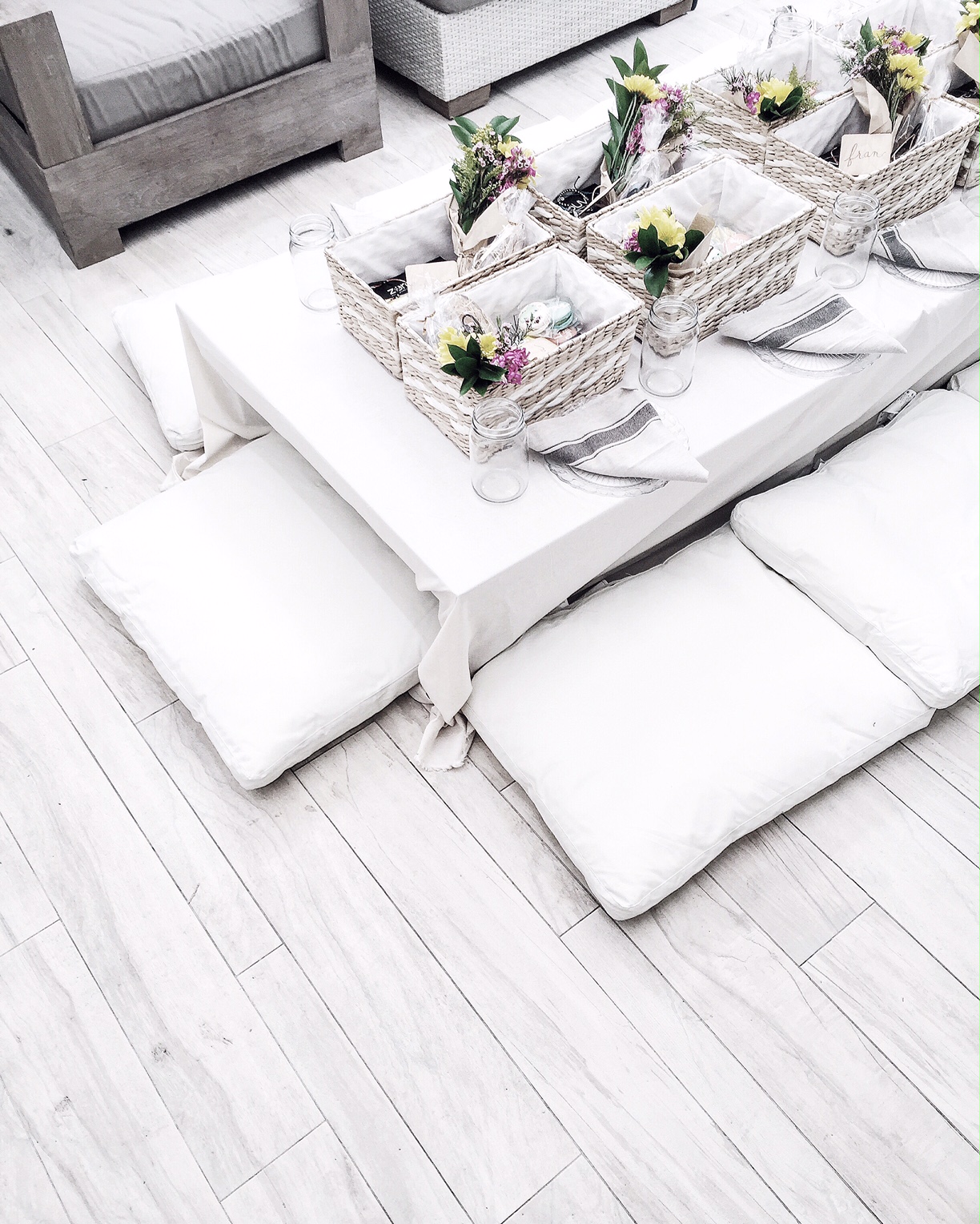 I don’t do DIY events often at all.  I’ve only done private events so far, and this one that I did for the Love Culture x Zero UV blogger brunch was booked through my friends that work at Love Culture. 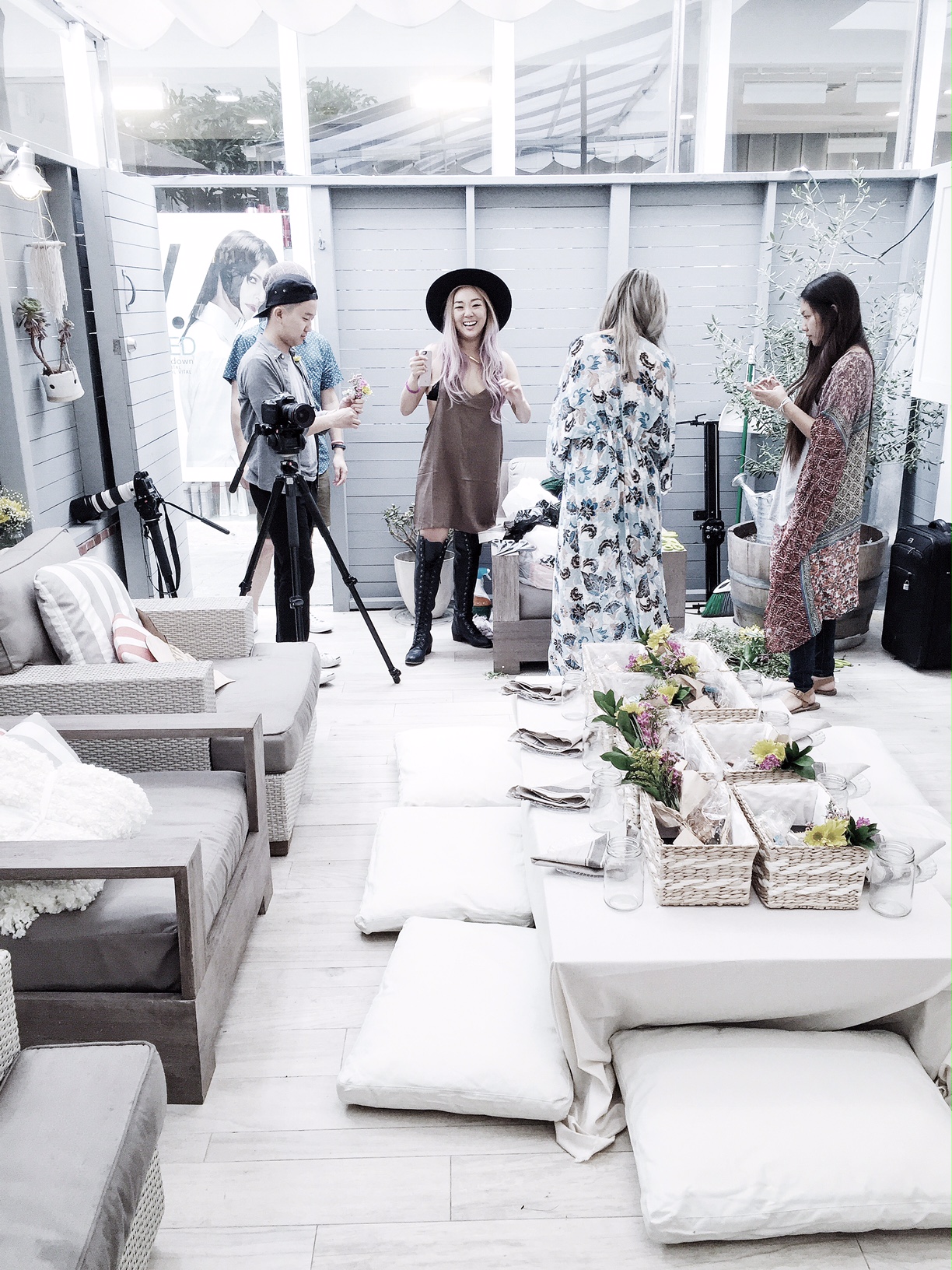 It was a very cute and intimate event with a group of fashion bloggers, and aside from teaching them all how to make my yarn hanging DIY, I really enjoyed helping set up for the event to where I was like hmm I think I’d really love doing day-of-event styling in general, and then I fantasized about it some more. 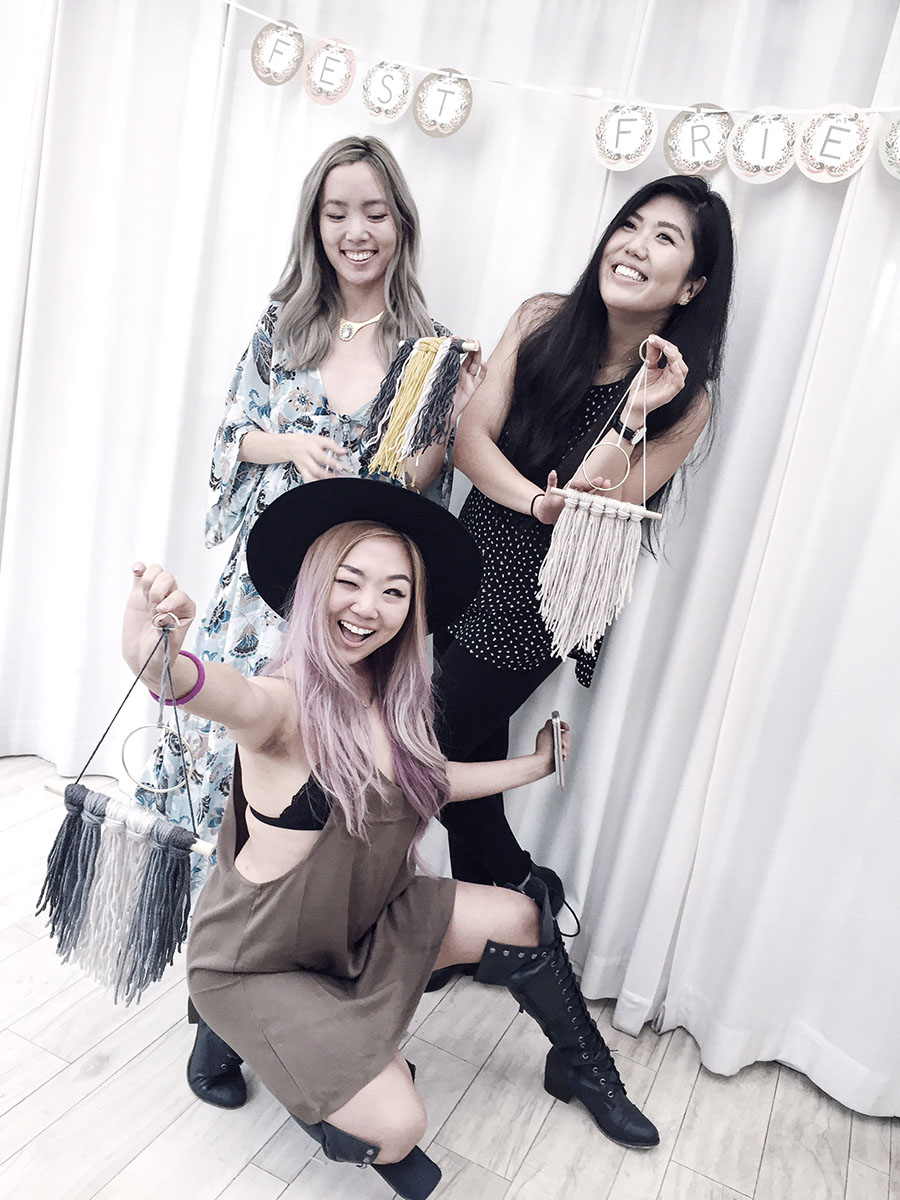 I’m a dope and forgot to get a group photo with everyone, but I got this one with Stephanie and Christina.  I danced on a competitive team with them in college, and they’re the kind souls that invited me to do my DIY thing for this event.  We all struggled a bit trying to hold the yarn hangings right. 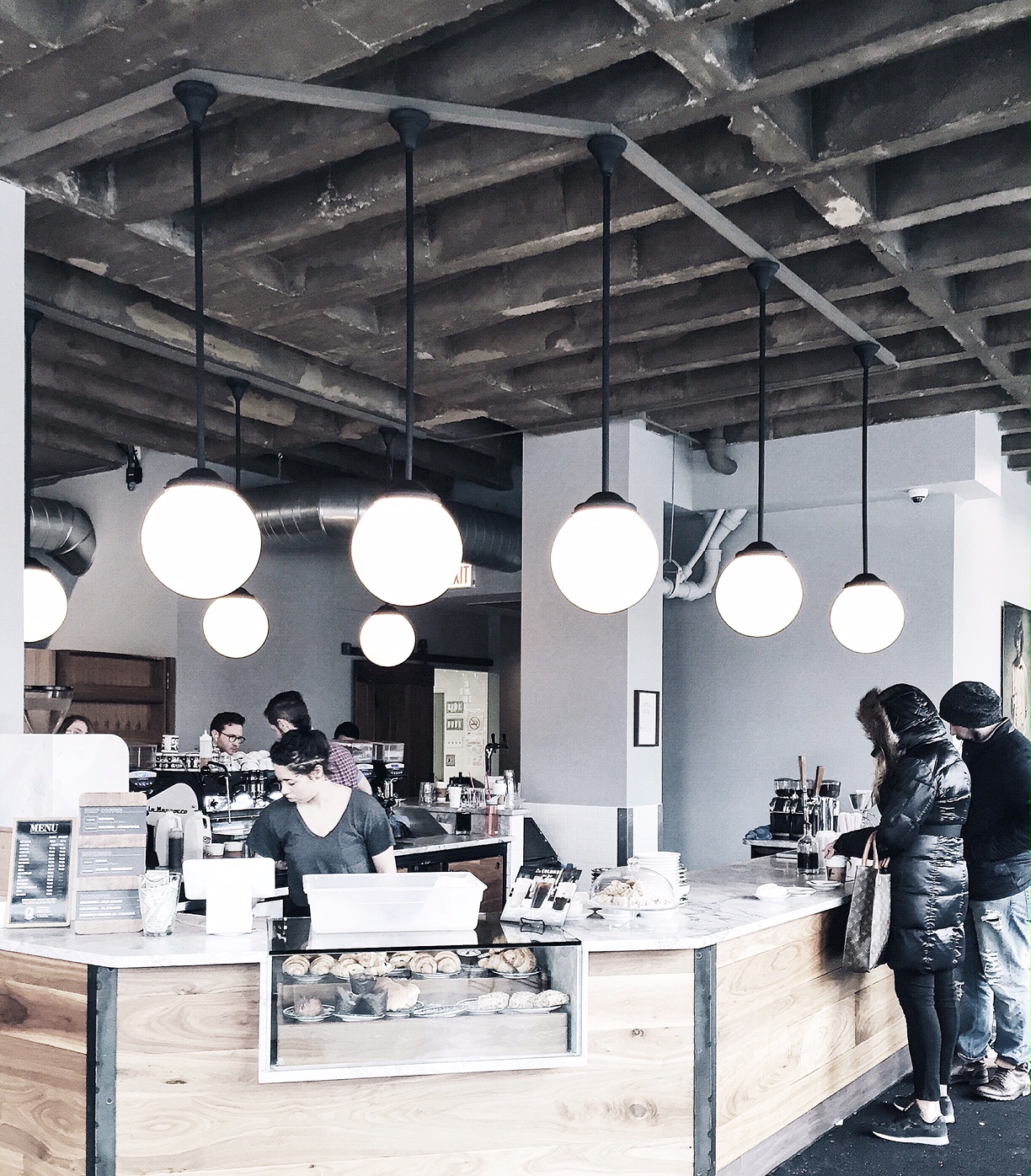 I visit Chicago regularly because my boyfriend’s family is there, and the other plus is that this is where I lived for the first 18 years of my life, so I have a very soft spot for the place.  Each time we come we stay with family and hang out with them in the good ol’ burbs, which we were apparently so busy with last month that this is the only photo I took, dangit.  We were in the city for one afternoon and stopped by Colombe for some very good coffee, made extra good by how it was rain-snowing outside.  That weather.

I’ll have to snap a photo of my childhood home next time just for fun and share that with you guys, which is now occupied by strangers and would totally not be creepy at all for me to do that.

I turned 29 on April 24th.  I remember looking up at 29 year olds and thinking man that’s so old and adult, but I’m here now and still feel like I haven’t passed into “adulthood”, which I’m slowly discovering is a made up thing (it is, right??) or at least the concept of defining a moment of passage into adulthood is very lofty, and perhaps I’m just not there yet to know what that’s like.  I’m really feeling like quoting lyrics from John Mayer’s “No Such Thing” but I’ll spare you that.

A few friends drove down from SF to visit my birthday weekend and we pretty much partied every night like we were 21 again.  It was fun, but also a solid reminder that I’m not 21 anymore HA.  Seriously, I can’t ever do that again… but I’ll hold it in my box of fond memories.  We all danced on the same team in college (same one I previously mentioned) and one of the big competitions was the same weekend, so we visited the kids on the team now and had a bit of a reunion with other alumni.  It goes on every year and I always look forward to it.  I also took no photos of that, surprise, but you saw it on Snapchat if you’re following me on there! 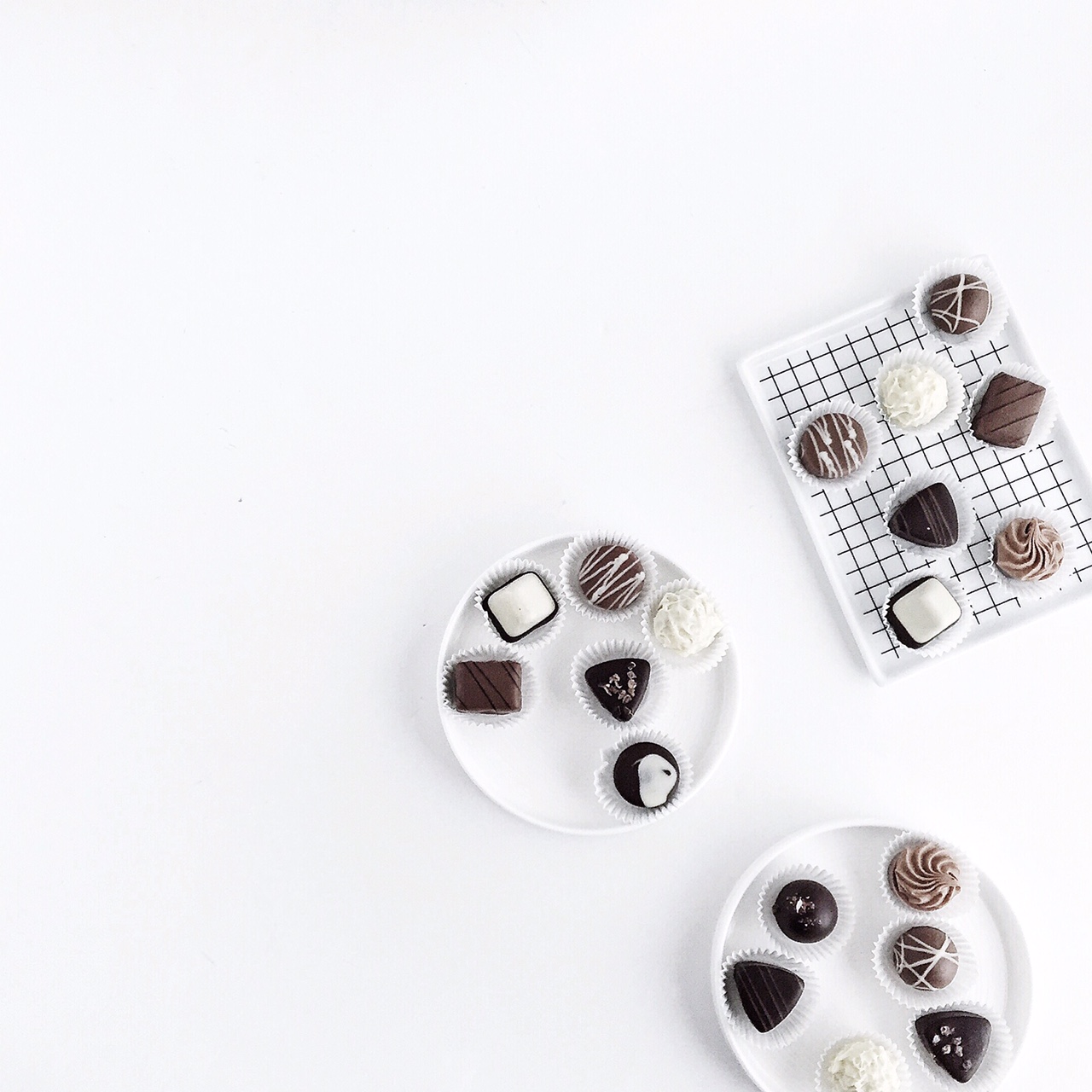 Boyfriend missed most of the festivities because he was in Germany visiting some family, but he returned the night before my birthday and brought back a gigantic box of these German chocolates and they’re amazing.  I’ve been eating many a day and we still have a bunch left.  I just ate a couple when I started writing this post. 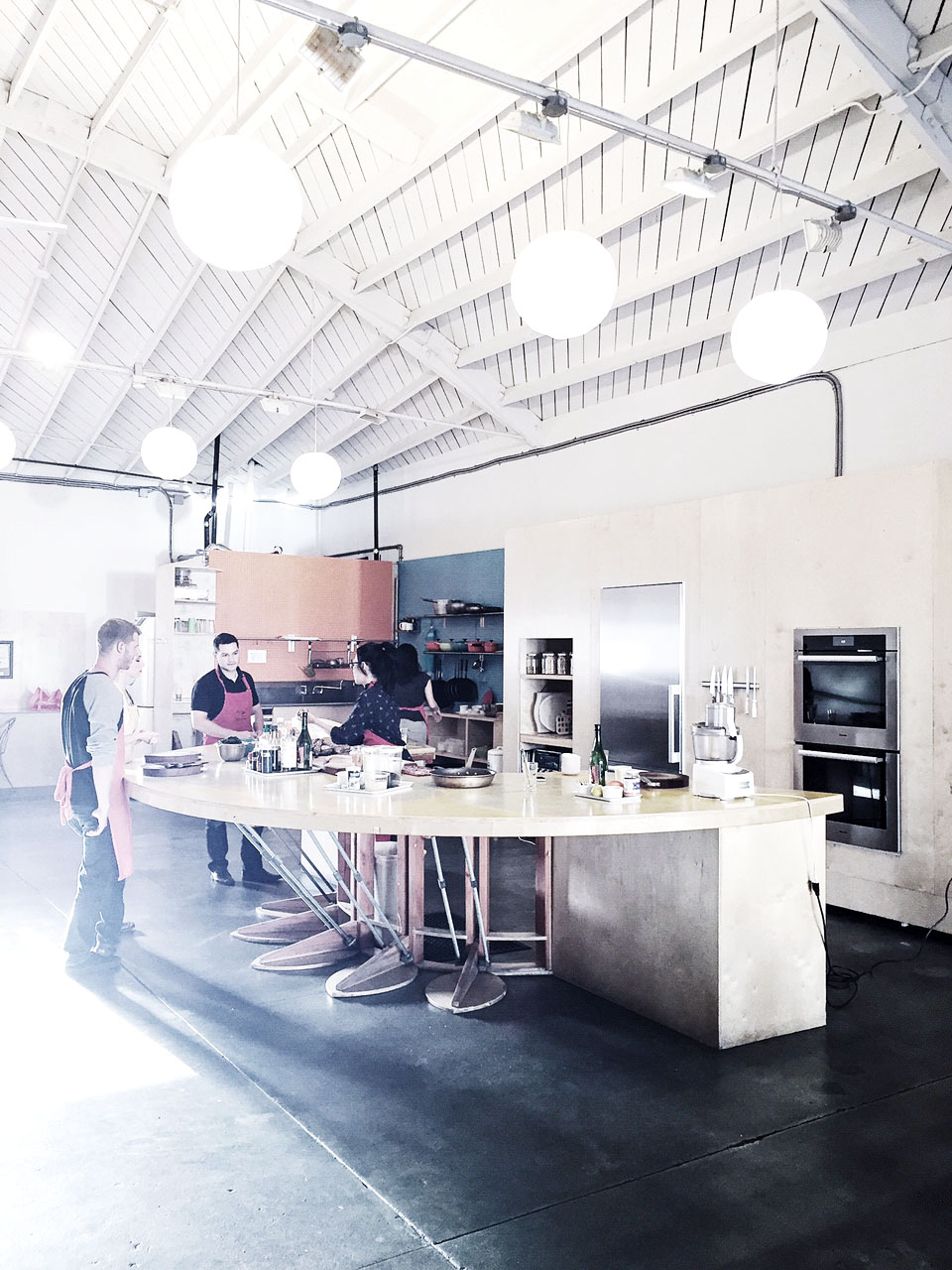 We had a little b-day celebration at this cooking school place and took a sushi class, which was very cute and fun because there was a ton of food, beer, and sake and pretty much everyone else was a couple celebrating a birthday, but I’d be curious to take a class at one of those sushi academies next time.  Sushi is my FAVORITE, like I’ll eat it till I’m sick.  Eating is generally my favorite too.

Each birthday someone always asks if I feel different and the short answer is no if we’re talking about if I feel older.  I think in the past I used to have a lot more anxiety over acknowledging each passing year because I felt insecure about what I have or haven’t accomplished in my life, but I guess what feels different now is that all that crap feels so much less daunting than it used to, in light of all the good people that I’m surrounded by and having so much to look forward to in the near future.  A friend and mentor of mine described leaving her 20’s as a very good time in life, where she stopped caring so much about what other people think and felt the most at peace with doing her thing in whatever way she wanted.  I’m feeling that way too, now.  I guess I do feel different!